November 16th 2013
Three members of Sleeze Beez (Andrew Elt, Chriz van Jaarsveld and Don van Spall) are the
29th of November SPECIAL GUESTS of the band Rebelstar. They come to perform with the
Dutch band ON STAGE during their CD Release Party at Paard van Troje, The Hague, Netherlands.
Block this date in your agenda!

September 18th 2013
If you like the Beez, you have to see this Sleeze Beez promo starring TV Star Peggy (Granny)
Joseph. Click here to see this promo on YouTube.

August 4th 2013
After being offline for more than 2 years, sleezebeez.com is back online.

January 2011
Check the Twitter feed on the right to read all about what we're up to.

August 8th 2010
The footage from the warm-up gig in Helmond has been posted in four parts on our YouTube Channel.
Enjoy.

Picture Of The Year 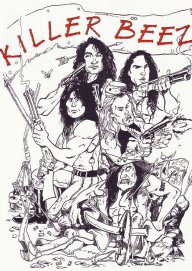